We’ve been playing a lot with numbers recently, so here is the first post about a calculator that is very easy to make and fun to practise numbers with. 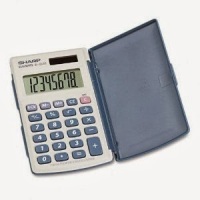 I found this idea not long ago on another blog: Learn with play at home. And I decided to make it as E. LOVES playing with calculators. Sometimes she asks for it and pushes the buttons for 15-20 minutes all by herself saying the numbers and signs (both in Hungarian and in English).

The first calculator was dropped so many times its display went wrong so we bought another, more simple one.

My idea was that she could have her own calculator that suits her little fingers.

How to make it:
Sticking the caps on the cardboard is tough. I used superglue as the edge of the caps were very thin and I wanted them to dry quickly. (After few minutes of playing one of the caps came off, so this might not last as long as I wanted)

The page I find this idea on also adds an extended version of the calculator game for those who have started learning to write. I’ll introduce it later if E. still wishes to play with the bottle cap calculator. 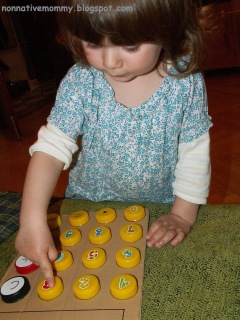 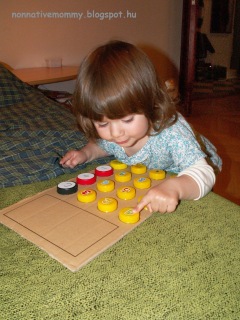 Now she is enjoying it a lot.

I managed to record a video too, but it is too dark. If you have any ideas how to lighten it let me know and I’ll attach it.

I’ve been trying to lighten the video but I couldn’t. Here is the dark video anyway.
But I also recorded another one with our native nanny today. They are playing with the new calculator.