In Hungary we have a special day called St. Nicholas Day on the 6th December. St. Nicholas (=Mikulás) is depicted like Santa Claus and more or less they are very similar legendary characters.

As Mikulás is a big day for Hungarian kids, our local Helen Doron school also organised an event: meeting Santa on Saturday (6 Dec). Alas, I left the camera and my phone at home as we were in a hurry to leave for the school, so all the photos were taken with the HD school’s camera.

10-12 kids signed up every half an hour on the big day. (FYI: Financial contribution of the event was 500HUF/family). When we arrived the previous group was in with Santa so we had time for some snacks, cocoa and some crafts. It was very simple but a lot of fun activity with a cardboard ring, some black circles, white hearts and some orange scraps. Our teacher, Zs. was preparing the materials and helping the kids with the crafts. And what did we make out of them? This door wreath of penguins: 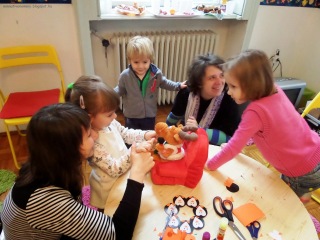 Then our time came to go in Santa’s room, where Santa was sitting on the sofa with a thick book. In the corner there were some props for a Christmas story. The starry sky, a stable with a new-born baby in the manger. 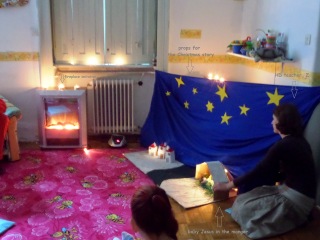 Santa read out the story of a tiny, sad star, called Starlet, who grew big and hot when she needed to give light and warmth to Baby Jesus. The story was read in English, one of the HD teachers’ (Z.) partner played the role of Santa. Although his English wasn’t perfect, but good enough for the occasion.

After the heart-warming story, the kids needed to sing (together) a Christmassy song for Santa (luckily with the help of the HD teacher – Z.). We sang “We wish you a merry Christmas”. E. was really quiet, so I whispered into her ear that she needs to sing louder, as Santa can’t hear it. Then she started to sing REALLY loudly. She took it seriously and she was so cute. 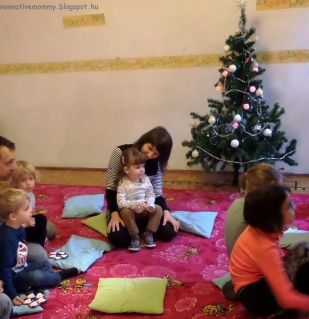 Next, Santa pulled out tiny presents for the children (szaloncukor – the Hungarian traditional Christmas candy and a tangerine) from his bag. We could take some photos with Santa and also the director lady (O.) took some (Thank Goodness!) so this is the only reason why I can include some in this post. 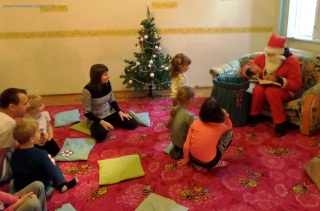 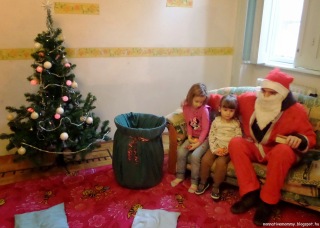 After meeting Santa, we went back to the crafts room to Zs., where we could eat some more or do some more crafts. A Christmas card this time. The reindeer inside are E.’s finger prints. 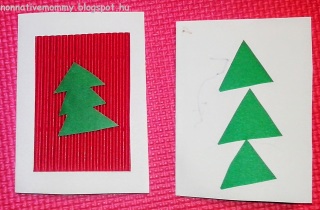 After having finished two Christmas cards, we thanked O. and Zs. for the nice and well-organised Mikulás party and left for home to tell Daddy all the exciting details about meeting Santa.