E. took part in her very first day-time camp in the first week of August. Of course, it was an English camp. What else?

E. took part in her very first day-time camp in the first week of August. Of course, it was an English camp. What else?

Zs. from our old Helen Doron school founded her own HD school and summer camps were organised for kids throughout the summer. On the first week of August E. took part in  fantastic adventures in English.

Every day started at 9 (with breakfast) and ended at 15:30 when kids needed to be picked up (one could arrived later and the kids were taken care of. They watched some animations until parents arrived). The age group was quite appropriate for E.: from age 4 to 8.

Here comes the detailed overview of the week:

This was a getting to know each other day. They stayed in and did a lot of arts and crafts and played games so the kids could get familiar with each other and the teachers (Zs. and Z.). E. was rather quiet on her first day, but I expected that. She always needs time to get used to a new situation.

They painted a mask

There was English circle time in the morning 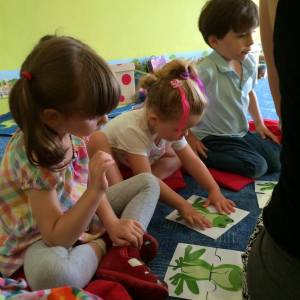 …and in the afternoon 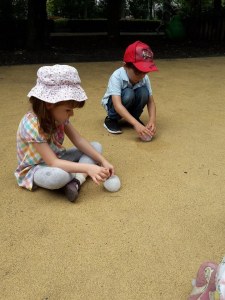 For a while E. was watching the frozen dino and waiting for it to melt… but it was BORING so she went climbing a bit…
Then returned and waited and waited patiently…

As the topic of the day was dinosaurs, dino fossils were also made by the kids. 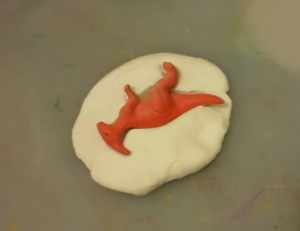 They always had some free playtime with lots of fun toys, books and games, too.

They visited Tarzan Park  (an outdoor fun park) after lunch. (By the way lunch was ordered for the kids from Egészségkonyha and arrived every day in the morning. As for food, kids got food 4 times a day – breakfast, snack in the morning, lunch and snack in the afternoon too – got bakery products, cereals, vegetables and fruit. E. liked them all and didn’t complain at all. On the first day their chicken nuggets were dino-shaped)
The group in Tarzan Park with Zs.: 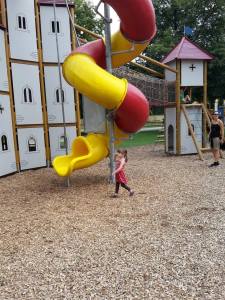 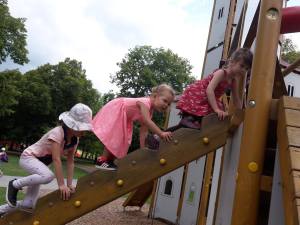 E. got really tired after this day full of climbing and moving around a lot. She didn’t nap in the afternoon. (After lunch on most days they had some quiet time. Whoever wanted (needed) could sleep but a Disney film was usually shown and E. was more interested in watching it than taking a nap)
She was a little bit braver this time as for talking in English but I needed to motivate her with something. As Baby Sis didn’t let me do anything creative I offered her some treats when I pick her up if she spoke more than the day before. And she did. I took her some M&Ms. A rare treat so she did appreciate it.
Day 3 – Rex Animal Farm – E.’s favourite day

…listened to a lady talking about how to be a responsible pet owner.
They also had a dog agility training session. E. was brave enough to take the dog (called Gesztenye) through the course. 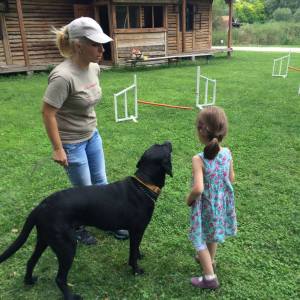 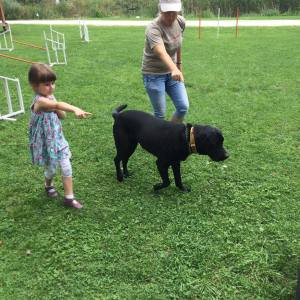 They also had their lunch at the Farm

They had time to enjoy the small playground at the farm

There was no English session at the farm only the HD teachers talked to the group in English but the other days were full of English from morning till the afternoon. The teachers know it well that E. is bilingual and they didn’t use any Hungarian to her throughout the whole week.
Day 4 – Picnic
After the usual morning session in English (when they painted some stones and their dino fossils from day 1 with glow-in-the-dark paint) the kids went to Margit sziget (Margaret Island) to have a picnic. 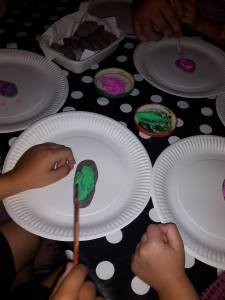 They were watching the big fountain show,

went to a playground,

and had their picnic (yummy lángos, E.’s favourite street food). 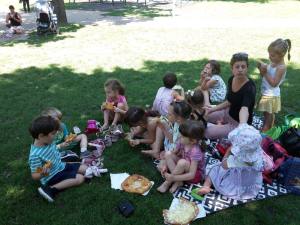 The kids were really tired after the long and action-packed week so when they got back they had some nap time. At last E. slept a bit and felt more relaxed in the evening.
Day 5 – Mini show for parents
On the last day a mini show was prepared for the parents to finish the camp with.
There were some arts and crafts: kids prepared their presents for their parents by themselves (and with a little help from the teachers. 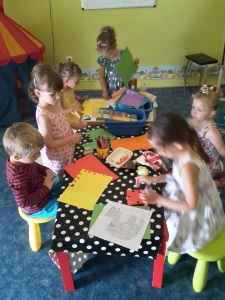 The parents received a paper basket decorated by the kids with some hand-made artwork, like an origami frog or the painted dino fossils, plus a greeting card with the best photo of the child taken during the week, stuck in it. The show was great and touching all the kids could show themselves a bit in English.
All in all, the whole camp was a great experience for E. (trying herself in an unfamiliar English environment and meeting new people), packed with a lot of fun activities and programmes in English. It was value for money indeed. We’re surely signing up for the next year’s camp too.
Advertisement