Since autumn arrived we have been collecting leaves, talking about why leaves change colours and why they fall down. We’ve been hugging trees, examining their bark, trying to climb up on them, just to mention a few tree related activities. Outside.

When the weather got really rainy I thought I would bring the tree activities inside. That was when I introduced the popsicle tree activity to E.

How we played:
I gave E. the bag which I collected all the goodies in and I showed her how to build a tree. I just started and she took the lead.
While doing it we were talking about the different parts of the tree (tree top, branches, leaves, trunk, bark, roots). Also we mentioned what we can see in the tree top in different seasons. (green leaves in the spring, fruits in the summer, bare branches and yellow leaves in the autumn, nothing in the winter).
She placed the leaves very accurately.

Then some conkers and a squirrel…

After a while I couldn’t hold Baby Sis back and she came to “destroy” E.’s tree. There was some screaming and “don’t touch it” but not much playing together. E. gave L. a conker to play with but I had take it away from L. as it was too small (and I wanted to avoid ER at all cost) E. tried to give Baby Sis a laminated leaf but she wasn’t interested. Baby Sis wanted the popsicle sticks, which meant the end of the tree.

After a while E. gave up  (got a little offended) and turned away from us to build a house instead out of the popsicle sticks. 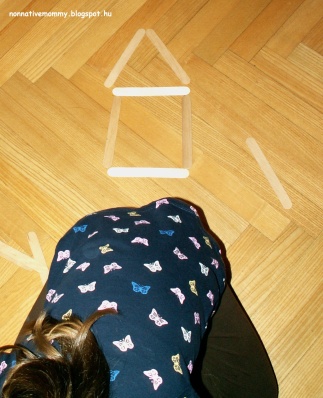 E. was so uninterested at the end that only Baby Sis helped me pack away. At least we practised “put it in” with her.

As you can see life and activities with 2 kids are quite a challenge. I keep trying but success is still far away…

Anyways, I’m thinking of adding some brown yarn or thin ribbons to create the roots. We’ll try again next year when Baby Sis might not want to “destroy” but rather want to build.