The girls have a bad dream every now and then, but lately more often. So I looked up easy dreamcatcher ideas on pinterest and we made them to chase nightmares away. Not to mention, it serves as a great craft activity for the crafts class for school (schools have been closed due to the corona virus pandemic, so we’re all at home) 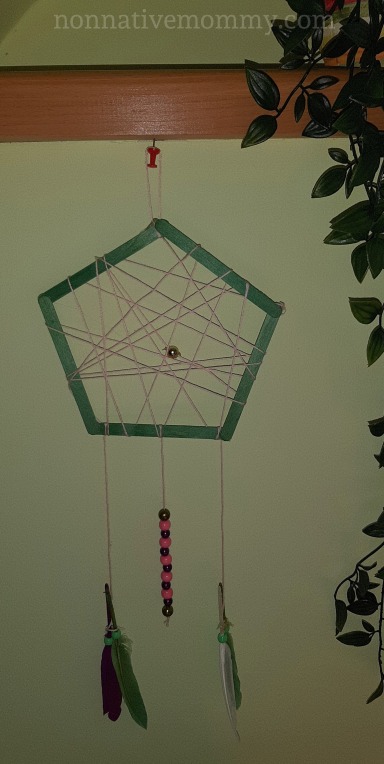 (Warning! It’s not so easy, there are easier ideas on the pinterest link above)

How we made it:

First, I prepared my own dreamcatcher to show it to the girls. As soon as they saw it they got excited, though E was a little hesitant to make it at the beginning.

We needed a circle to begin with, but I didn’t want to use a paper plate. I can’t cut a neat hole out of the middle, that’s why I decided on the popsicle sticks.

Both chose a colour and put together the frame, which is in real a pentagon. To make it easier for them to create the frame I pre-drew a pentagon (When I made the sample dreamcatcher after having glued the sticks together, I drew around it.)

While we were waiting for the hot glue gun to work, I was talking about the dreamcatcher.

They immediately realised the web, and the bead spider. I told them that the nightmares are stuck on the web and the imaginary spider eats it. They really enjoyed this idea.

But of course, the question is: What happens to the good dreams? I showed the hanging feathers and beads. The light feathers direct the good dreams to reach the sleepers.

I was a little worried about the hot glue gun because of my curious 4-year old, but she and her elder sister too, handled it with care.

So, we glued the sticks together (they needed help) and started the webbing.

I advised the to choose a thread colour that contrasts well with their frame. So they did. And of course, the spider bead was crucial.

E. tied her own thread at one corner of the frame, I did this for Little L. and we fixed it with the glue.

While threading you need to make sure that the thread is tight. Poor L. was a little light handed and had to start it again, but she didn’t give it up.

Towards the end of the webbing we thread the bead on and also fixed it with the glue (you can simple put a knot before and after the thread, but gluing was easier and the kids really enjoyed that I let them use the hot glue gun.

The next step was choosing the feathers and beads for the hanging decorations. The bead I’d chosen had too little holes, so we picked pony beads.

They threaded the beads of their choice and I helped them both tie up the feathers and beads on the frame.

Little L. was close to give it up towards the end when the thread was falling into many thin threads (plus she didn’t sleep in the afternoon) but finally, she hung in there and finished it with my help.

The results are beautiful. The girls showed them to the camera real proudly. We’ll put them into practice tonight. 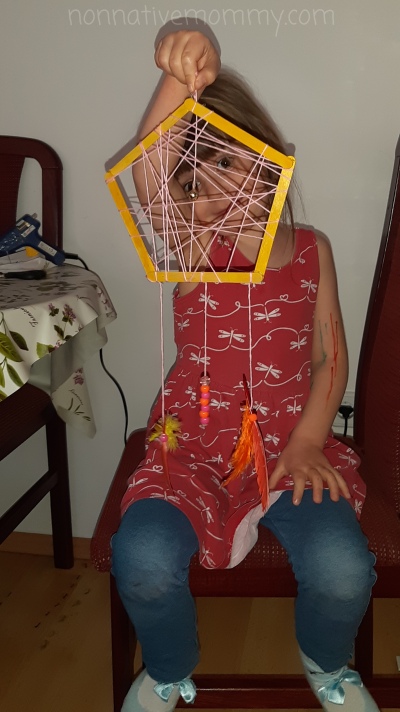