Just a short post about how to sign that we are using one or the other language. At present I’m trying to use every time to talk in English to E. So for instance, when D. takes the dog out for 20-30 minutes in the morning or in the evening E. and I change into English.

Before I start speaking English I sing the ‘Hello’ song. It is taken from the BBC programme called Something Special. (Jump to 0:20 for the song)

Before we change into Hungarian, I sing the “Goodbye song” from the same programme. (You can find the video below – just jump to 13:20. This is where the “Goodbye song” starts. Otherwise it’s a great episode on birthdays. Worth watching the whole). I also use the MAKATON signs while I sing. E. takes pleasure in it and the songs make it clear when we use one language and the other.

I’m sure there are several other ways to give a signal for changing between the languages. I look forward to your comments on how YOU do it.

M., who I met on the facebook, in connection with MEC, advised me to have a look at the MAKATON signs that she uses with her daughter to connect the two languages. No matter which language you use, use the same sign for the same thing, so the child can learn to connect the meaning. You can find out your own signs as well, or do a signing course in Hungarian. I don’t want to recommend any courses as we didn’t take them. Just google it: baby sign language course Budapest.

Here are some examples, signs we use on a daily basis: 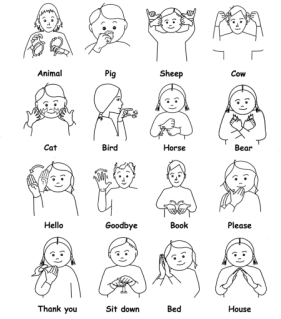 Though we sign the horse in a different way: 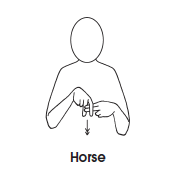 You can find more signs here.

You can also learn from a special BBC programme for kids with special needs. The programme itself is called Something Special.
Each programme sees Justin and Mr Tumble (played by Justin) out and about applying signing in a variety of places. Topics covered include babies, pets, toys, weather, clothes, shops, food, all about me, where I live and colours. Mr Tumble always dresses up, wearing brightly-coloured clothes and even big shoes! He moves around clumsily and has lots of fun.

The language used throughout each programme is supported by Makaton signs and symbols and is designed to be understood by children in the early stages of language development. (source: BBC – Something Special )
Full episodes are 15-20 minutes long. What I did with this programme is that I watched them one by one on youtube and made a playlist of what I needed (20-25 videos). I learnt the signs (they are very straight forward and easy to learn) and started using them both in English and in Hungarian (same sign for the same thing). E. was 6-7 months old when I introduced signing to her. (4-5 signs at a time. When she was familiar with these I introduced new ones.) Sometimes I picked a short part of an episode (max. 5-6 minutes long) and we watched it together. This could have begun earlier as well. But never cry over split milk.

Here is the first video I saw and really was fascinated by it:

http://youtube.googleapis.com/v/wNTckV9hVIY&source=uds
I don’t do the signing all the time only if E. is not paying attention or I really want to link a new expression in both languages. Most of the time signing draws her attention. In the next post I’ll write about some songs which can be followed with signing. It’s a hit with kids. They love it! You’ll love it too.