This September we read Fantastic Mr Fox by Roald Dahl and it was a hit with E. So much that she had a great idea: let’s play the story with some props.

As it was a sudden idea we needed to prepare everything on the spot. There was no time to think it over, still it went smoothly and ideas were coming to our mind quickly.

It wasn’t a question who’s going to play the main role.

Originally I presented E. with a plush fox so we can play the story of Gruffalo.
First, the three farmers gave me a hard time but with help of kitchen roll/toilet paper tubes (for the bodies) and plastic balls (for the heads) I managed to make them come alive. More balls represented the chickens, ducks, geese and turkeys.

E. made an apple tree as a symbol of Mr Bean’s orchard. She also placed some tractors on 2 farms. 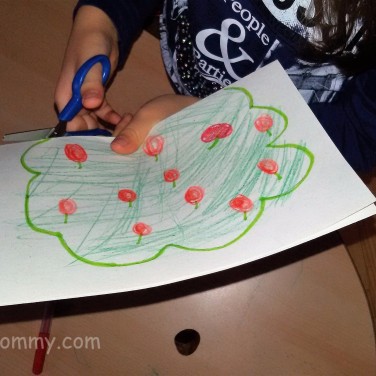 The fox hole was created with floor mat puzzles. (The tree above it was imaginary)

E. was really creative. When we realized we didn’t have shovels (the sand toys were in the storage room downstairs) she ran to the kitchen to take some spoons.

As we were creating the props the story unfolded itself.

There was a chapter we left out, the one with the rat as E. wanted the animals to have their feast 🙂
Our story time lasted almost two hours. It was very very spontaneous, imaginative and much fun. A wonderful experience.