Little L.’s first English summer camp has just started. In this blogpost I’m going to collect the happenings and activities.

First of all, I’m also at the camp as an English-speaking helper next to my university mate A, who organises the Jump&Fun camp for non-native English speaker kids. Apart from us, our British nanny C. is there too, together with a Hungarian, kindergarten nanny to help around the kids.

The age group in the camp was really varied ranging from 2,5 up to 13,5. We needed to concentrate on working with the kids in smaller groups according to their age. It was quite a challenge to integrate them, but we sorted it out smoothly. It was exciting to see how well kids interacted with their peers and with older/younger kids.

The location of the camp was pretty central in Budapest. A playhouse provided two rooms for us.
(All images in this post © 2019 GA, LE – please do not download or share)

The first day turned out great. We arrived at the playhouse location around 8.30. There was a getting-to-know each other game with parents and kids. L. was silent all through the ice-breaking game and didn’t want to speak to anyone, so I was her English voice. 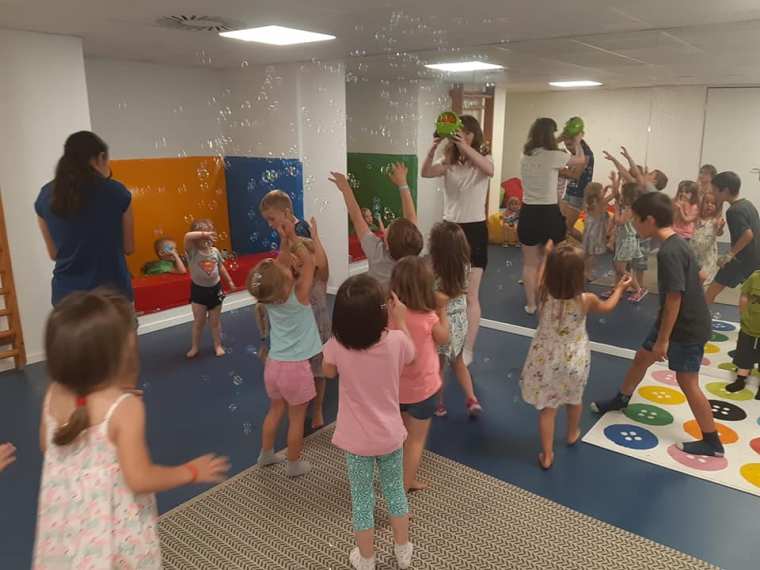 We got a very practical red hat and Jump&Fun rubber bracelets as presents. L. chose the blue bracelet (her favourite colour), of course. After that A. started a Jump&Fun session with the whole group: 22 kids out of which 2 are her own. There were a lot of singing (Hello Everyone) and playing involved with balls (Roll the balls) and moving around (Green light Go!) that the kids loved. The session took about 35 minutes.

Around 10 we left for the playground with the kids and had real fun there too. The weather is very hot this summer but this playground was mostly in the shadow. The kids played in smaller groups at different parts of the playground (jungle gym, sand pit, swings, football pitch, see-saw etc). The teachers who were supervising them joined in the kids’ game and talked to them in English only. It was fantastic to see how these little children understood almost everything and quite a lot of them were able to interact in English as well thanks to taking part in A’s weekly Jump&Fun sessions and the English time they spend with their parents at home.

First, I was with a group of kids at the jungle gym and the slide where I helped them climb up and slide down etc. commenting on every detail of what they were doing. I also moved with some of them to the swings where I was singing them swing songs and other songs that came to my mind.

Last but not least they cooked me sand cakes and lunches and it was so sweet to see how much they were enjoying their playtime. Sometimes Little L was disappointed that I didn’t focus on her alone, but she also had lots of fun.

We had a short snack/singing break then the kids went back to playing.

Lunchtime was at about 12.30 where everything went in English too: bathroom time, serving the food, wishing them bon appetite, helping with the spills,  etc. Lunch was ordered and delivered hot for the kids. The amount was too big for children and there was plenty of leftovers unfortunately. I brought our own food from home due to our special diet.

The little children went to take a nap in another room where A. read them a short story and sang them lullabies while the older kids who do not sleep anymore together with C., the native nanny, had some activities and play time in English. 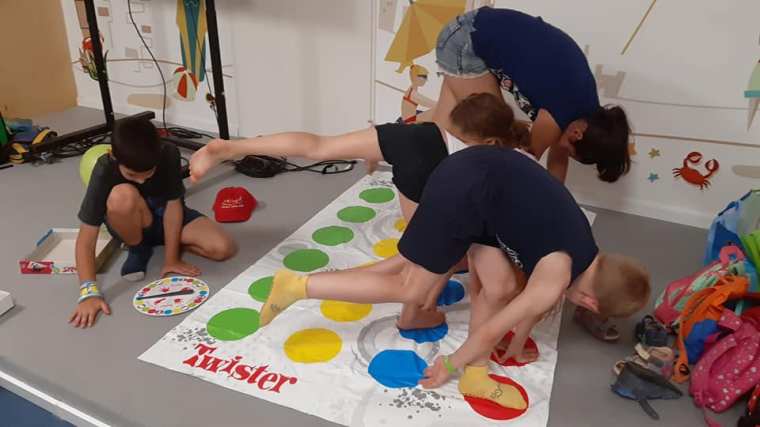 After this we left the first camp day and went to Grandma to take a nap as E. has her first German school camp at her new school she’s starting in September and we needed to pick her up in time early afternoon. Little L wanted to stay at the camp for the nap time too, which is a clear sign she was enjoying herself.

But at the camp they were very active in the afternoon too. 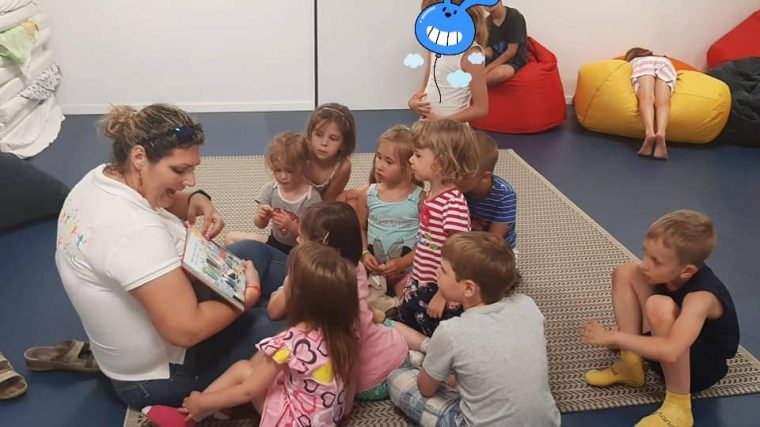 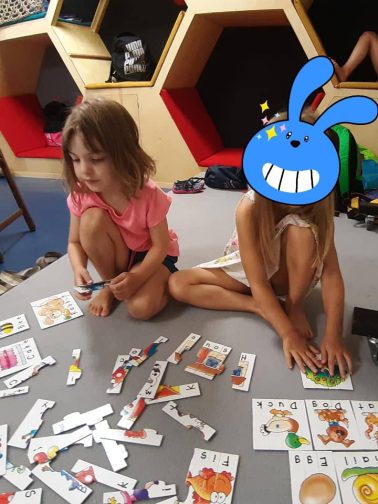 After arrival the kids had breakfast and a Jump&Fun session with lots of English songs, games and moving around. 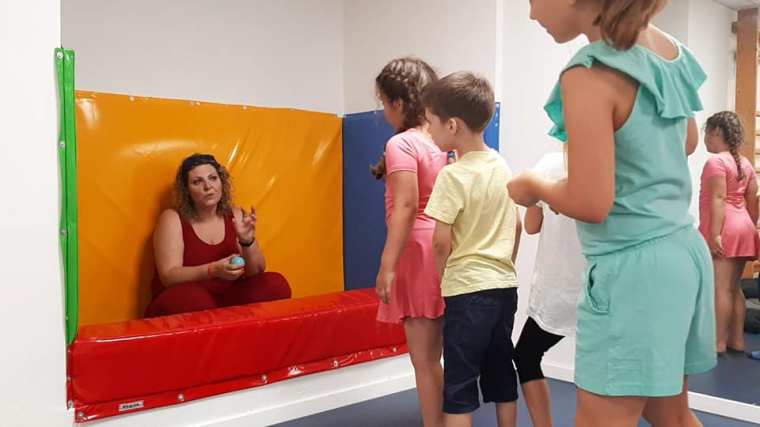 Everything went in English: everyday activities like offering food, washing hands, reading books, singing songs while getting ready for going out etc.

All the children understand nearly every instruction, but most of them answered in Hungarian. Gently I could direct some of them to say some sentences (requests, thank yous and other simple interactions) but they knew a lot of songs and whole books by heart in English. It was amazing to see other kids feeling comfortable in English not just mine.

Later we headed to the park to play and splash in the water. (It wasn’t my favourite part as it was a kind of public fountain and I’m a germaphobe) The kids looooooved it. Again, we were spending time with the kids talking to them in English, singing to/with them songs about splashing, the sun and the summer. (Oh Mr Sun for example)
Older kids played with C, the British nanny, games like What’s the time Mr Wolf, Duck, duck, goose, Colour shark and other playground games (Check out this book about playground games.)

The ones who got tired could rest on the blankets and play Dobble or other quiet games. 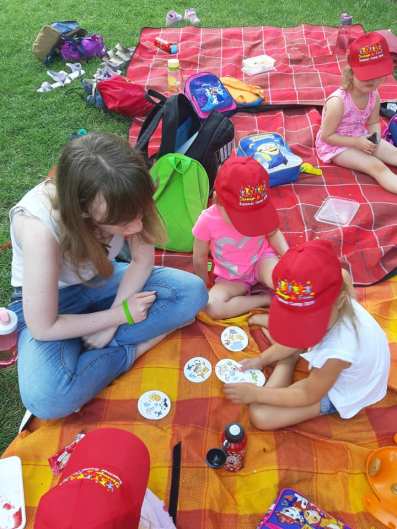 Lunch was at the same time as the previous day. Little L wanted to stay for the nap time, but I had to stay with her for a long time and finally she managed to fall asleep. During naptime I played with the older kids. The topic was All about me, so we played with body parts, clothes, feelings, the game called Simon Says. The kids drew around themselves and we made a Summer Suzy and Winter Willy picture, which they enjoyed a lot and added several details to the drawing, like jewellery, bags, a crown and other accessories.

Going home was a rush. After nap time it took quite a while to leave the camp with Little L and we were late for picking up E. Unfortunately we couldn’t stay for the afternoons at the camp.

Around breakfast some kids were working on the books that everyone got titled All about me. We were talking about the same topic as yesterday but from different perspective, plus the book offered fun sticker time for the younger kids.

Some other kids who didn’t feel like working in the activity book, painted a magic picture using only water. Still, the painting turned wonderfully colourful.

In the morning while A. was having her Jump&Fun session with the younger kids I was making faces with the older ones. Little L stayed with me of course 🙂 and made her own face as well. This activity comes from the Flying Tiger shop; a book of face templates of different kinds with tons of body parts and accessory stickers. We made some really funny faces. The kids were commenting what they added, finally they talked about the faces they’d made and had a good laugh.

We left after lunch to pick E. up from her school camp in time.

The afternoon was spent with a lot of arts and crafts, more Jump and Fun sessions and a lot of playtime in English until the parents came to pick up their children.

I can draw myself 🙂

To be honest, I was low on energy at this point by the end of the day so I stopped writing daily notes. Still here are some fun moments from the last two days of the camp (which had more or less the same schedule as the other days). 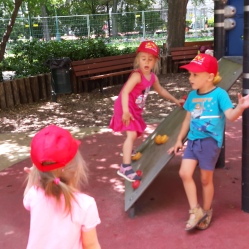 Relay races in the park 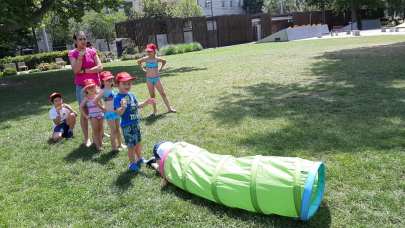 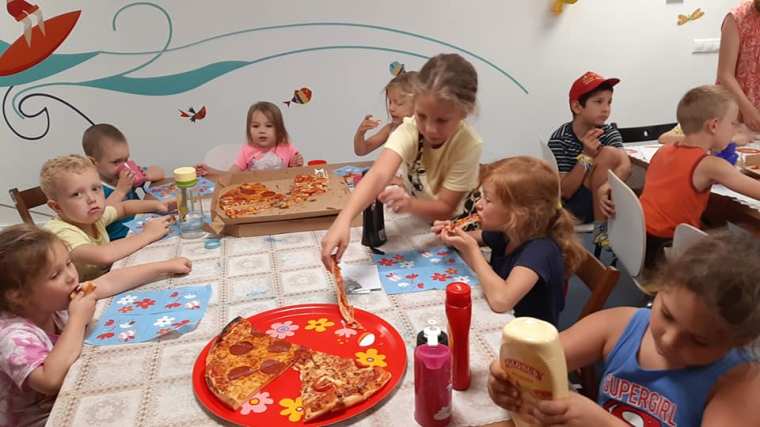 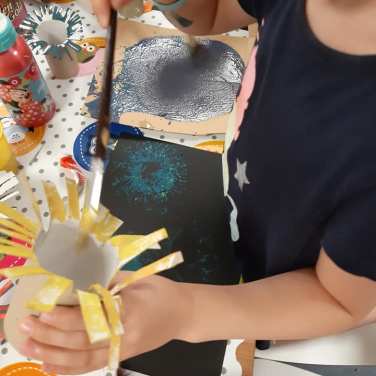 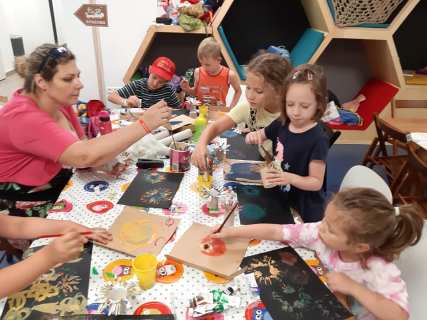 Making prop for the show 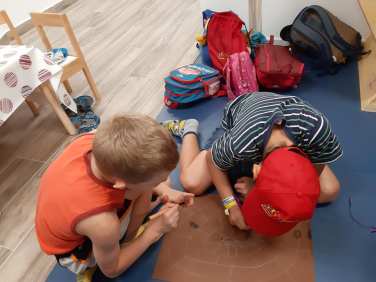 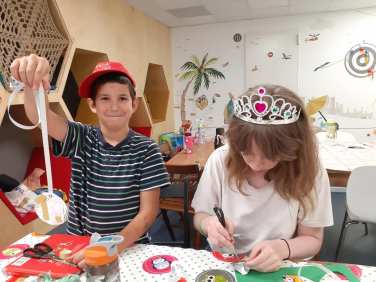 End of camp show
(a Jump&Fun session with all the children, and an act with the bigger kids performing Sugarlump and the Unicorn by Julia Donaldson). Both the kids and the parents enjoyed it very much. 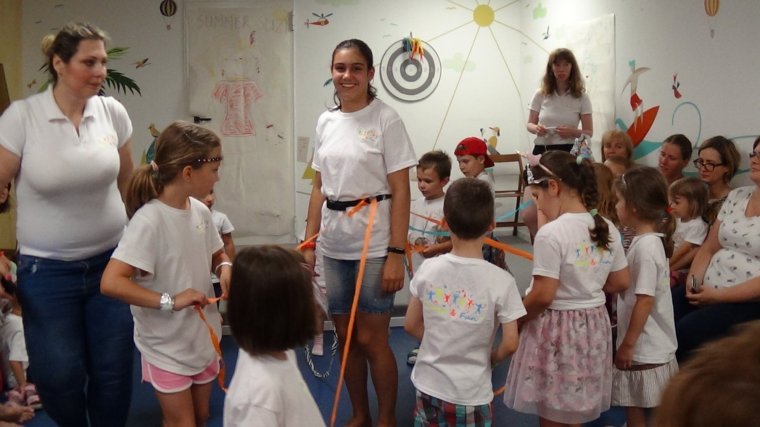 At the very end of the camp kids got 2 books best suited for their age out of these beautiful Usborne books: 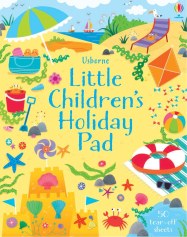 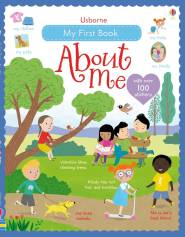 Apart from the baseball cap, a rubber bracelet, they also received a balloon, and an eggshaker, a certificate and a group photo of the camp:

All in all, the camp was absolutely fantastic, active and full of English time for the kids. It’s very difficult to work together with so many children (I’m only used to my 2 girls and they ARE often rather tiring) but it was very rewarding and energising. It’s absolutely wonderful to see these little children being able to interact in English and having loads of fun on their way of acquiring the English language with ease. Thank you for the great experience and all the fun!